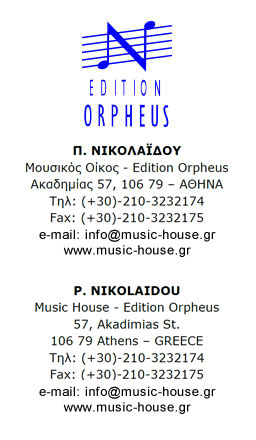 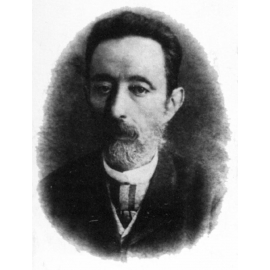 Greek composer, a leading figure in the music of the Ionian Islands, he created national operas and vocal music based upon Greek subjects, with libretti and lyrics in the Greek language and melodies inspired from the folk and popular urban traditions of Modern Greece.

Greek composer, a leading figure in the music of the Ionian Islands, he created national operas and vocal music based upon Greek subjects, with libretti and lyrics in the Greek language and melodies inspired from the folk and popular urban traditions of Modern Greece.

Born into a noble family of merchants of Zakynthos, he studied music in his native island under Giuseppe Cricca and Francesco Marangoni, and probably in Corfu under Nikolaos Halikiopoulos Mantzaros. Musically gifted, but also attuned to the climate of the time in the Ionian Islands, dominated by Italian opera and European culture, he composed his first short works in the late 1840s; the operatic scene Il pellegrino di Castiglia [The Pilgrim of Castille] attracted the interest of the public when it was presented at the “Apollo” Municipal Theatre of Zakynthos. His early successes encouraged him to settle in Milan, the capital of opera, in order to pursue more specialized studies.

In 1850, in the midst of the Risorgimento, Pavlos Carrer moved to Austrian-occupied Milan, where he studied with Raimondo Boucheron, Pietro Tassistro and Giuseppe Winter. Within the year, in a concert at the “Carcano” theatre, he presented his first orchestral works, and composed the score for Tomaso Casati’s ballet Bianca di Belmonte, staged at the “Teatro della Canobbiana”. Under the patronage of Francesco Lucca, the powerful music publisher, Carrer made his debut as an opera composer at the “Carcano” in August 1852, with Dante e Bice [Dante and Beatrice], an opera in three acts based on a libretto by Serafino Torelli. This work, which seems to have provoked the Austrian police with its political undercurrent, is about Italy’s national poet Dante Alighieri, his unfulfilled love for Beatrice Portinari, his political activity and the writing of the Divine Comedy.

In the following year, Carrer collaborated with choreographer Andrea Palladino for the comic balletCadet, il barbiere [Cadet, the Barber], staged at the “Canobbiana” and greeted with tepid applause (June 1853). However, this year had a great success in store for the young composer: his three-act opera Isabella d’Aspeno was premiered at the “San Giacomo” theatre of Corfu (February 1854), to be followed by a triumphant series of performances at the “Carcano” (April 1854 and March 1856). This work, on a libretto by an unknown author signing with the initials R.G.S., holds a special place in Italian opera of the ‘mezzo ottocento’, as it appears to have been one of the models for Verdi’s famous opera Un ballo in maschera.

Carrer’s success in Milan was completed with the production of his grand opéra La Rediviva [Risen from the Dead], in three acts, to a libretto by Giuseppe Sapio. This work was highly acclaimed when it was lavishly staged at the “Carcano” (January 1856), and the success was repeated at the Teatro Comunale of Como (January 1857), and at the “San Giacomo” of Corfu (December 1857). During his stay in Italy, Carrer also composed chamber music, and especially operatic transcriptions for piano and flute, dances and solfège exercises.

Inspired by the vision of creating a national music and becoming the first national composer of Greece, Carrer returned to Zakynthos in 1857. He collaborated with the local theatres as conductor and impresario, taught music, and married the prima donna of his works, soprano Isabella Iatra. It was during that same period that he composed four-act Marco Bozzari, his first opera on a national subject (1858-1860), as well as numerous songs to Greek verses, among which the famous klepht songGero-Dimos [Old Dimos], a folk-like song incorporated into the above opera. After a series of adventures due to its revolutionary content, Marco Bozzari was premiered in the town of Patras in April 1861; it is Carrer’s best-known work and the most popular Greek opera of the 19th and early 20thcenturies, numbering over 45 productions. Originally composed to an Italian libretto by Giovanni Caccialupi, it was gradually translated into Greek and its performances were frequently greeted with popular enthusiasm.

His two other national operas are along the same lines, though more sophisticated from the point of view of compositional technique. His atmospheric, exotic Kyra Frosyni [The Lady Frosyni] (libretto by Elisavetios Martinengos, based upon the long poem by the same title by Aristotelis Valaoritis) was presented at the “Apollo” theatre of Zakynthos, in November 1868. The heroic opera Despo (libretto by Antonios Manousos, collector of folk songs and versatile scholar) was staged at the “Apollo” theatre of Patras, in December 1882. Both the former, a mature work characterized by striking local colour, sensuousness and psychological insight and the latter, a palpably national work, rich in folk melismata and melodic motifs, are now available on CD.

At the same time, Carrer was still composing operas in the Italian style, like Fior di Maria [Greek title: ‘Marianthe’] (to a libretto with a novel-like plot by Giovanni Caccialupi, premiered at the “San Giacomo” of Corfu, in January 1868), in which realistic and pre-veristic elements can be detected. He took more decisive steps towards theatrical and musical realism with the composition of MariaAntonietta (libretto by Georgios Romas, premiere at the “Foskolos” theatre in Zakynthos, January 1884).

His last opera, Marathon-Salamis, an ambitious work in four acts (composed in 1887), holds a special place in his operatic oeuvre; combining late neoclassicism with early impressionism and a Wagnerian tendency for unity, it was never performed in his lifetime but 115 years later! Carrer also left two unfinished works: the three-act opera Lambros il brulottiere [Lambros the Fire-raiser], in the national style (c. 1886), and the operetta Contes Spourgitis [Count Sparrow], in the comedy of manners tradition (1886-1887). Finally, there is the title of a lost opera of unknown description, Don Pigna.

Pavlos Carrer was one of the most popular and most frequently performed composers in 19th century Greece, with a significant Italian career at the same time. He kept track of the development of European opera, listening to artistic innovation and constantly reviewing his compositional practice. In his style, one can detect Italian influences, especially from Verdi’s middle period and late bel canto. Yet his musical idiom is distinguished by a special personal touch and by his effort to invest his works with a national colour. He played a leading role in the most characteristic development in the field of Greek music that took place in the mid-19th century Ionian Islands: the first systematic attempt to create an independent national opera.

Carrer, Paolo  There are 2 products.