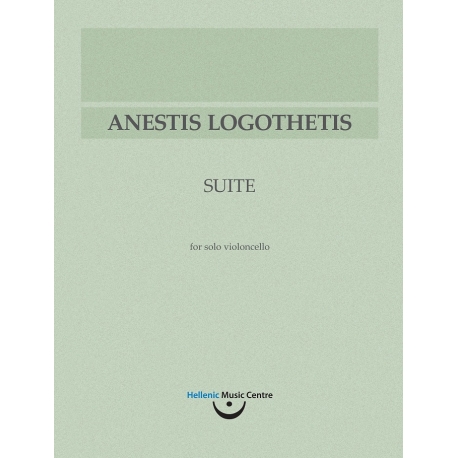 The output of Anestis Logothetis (1921-1994) is divided into two periods: the first (1943-1959) consists of works in conventional musical notation, while the second (1959-1994) comprises works in unconventional notation (“graphic” or “polymorphic” as the composer termed it). A basic characteristic of his personal system of notation is an original combination of music and finearts, through which he tried to describe the structure of his works and its evolution in time.

The Suite for solo violoncello, LWN[1] 33 (December 1952), under the original title Fünf Integrationen, was written so that it could be played alternatively by solo double bass, an idea that was abandoned during the process of composition. However, there was at least one performance by solo double bass in the composer’s lifetime.

From an aesthetic point of view, this work belongs to Viennese expressionism and is comprised of five short parts: I. Agitato, II. Burlesco, III. Grave, IV. Allegro and V. Scherzoso. The choice of solo instrument, the suite structure, as well as the relatively simple form of each part, with some sporadic—yet characteristic—elements of polyphony, evoke the solo cello Suites of J.S. Bach, though this compositional model is not a limiting factor in the new musical creation.