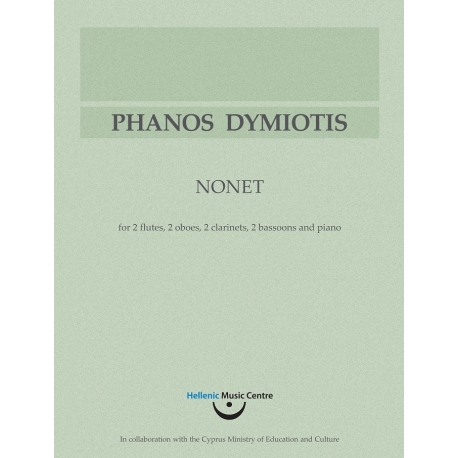 The brilliant Cypriot violinist and composer Phanos Dymiotis (1965-2007) completed the composition of his Nonet for 2 flutes, 2 oboes, 2 clarinets, 2 bassoons and piano on 20th January 1986, while an undergraduate at Trinity Hall College, Cambridge. He received a Bachelor of Arts degree (with an exceptional double first class honours) in June of the same year, and subsequently attended postgraduate courses in composition, first at Trinity Hall (September 1986 - August 1987) and then at Princeton University, which granted him a PhD degree in November 1995.

Dymiotis had been acknowledged as an important composer long before he "officially" studied composition. In an interview given in Nicosia in 1997 (O Phileleutheros, 29 June), Dymiotis said that his music was gradually becoming more approachable to a wide public. In the Nonet this trend is not yet discernible; this is music applying sophisticated techniques. The outstanding characteristic of the work is imitative counterpoint: we have here a twenty-one-year-old composer with a fast, sharp and luminous brain, playing with a wealth of canonical contrapuntal devices upon a limited number of short melodic motives. The effect is music of high-spirited vitality and perfect cohesion.

The opening phrase, sung by the first clarinet, uses eleven notes of the chromatic scale and incorporates the basic melodic motives, as well as the harmonic substance of the entire work. (The work is not serially treated but borrows these qualities from Alban Berg's serialism.) The motives are developed with a rich variety of contrapuntal imitative devices, in a dense succession and/or simultaneity, between the pairs of the wind instruments, between the instruments of each pair, between the piano parts, and between other grouping combinations, some of which are shown in the eight-measure exposition, ending with a loud G (the note "missing" from the initial row).

The density of the imitative counterpoint of a restricted number of short and distinct motives results in music that is fluid, transparent and fast-moving. The resulting micrographic quality of musical time is realised when, in measures 49-53, a climactic homophonic massive hammering on G blocks counterpoint for an instant. Indeed, counterpoint determines the work's form, achieving a cruciform, or bidimensional, symmetry: the feeling of symmetry on a horizontal axisis produced by the numerous melodic inversions, while absolute symmetry on a vertical axis emerges in the "recapitulation" in measures 148-152, consisting of the work's five initial measures reproduced in a strict retrograde in all voices. Four cadential measures close the work, repeating the notes A-E-G# that constitute the work's first motive and its harmonic substance, and ending on a long G#.

June 1986
University of Cambridge
Members of the Cambridge University Orchestra

11 other products in the same category: