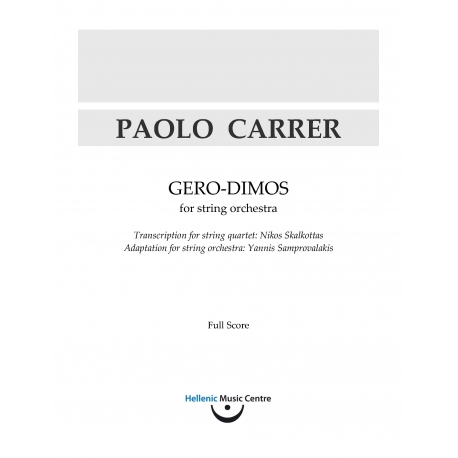 Score and parts available on hire

The famous song Gero-Dimos (pronounced Yéro-Dheemos, meaning ‘Old Dimos’; Sept.-Oct. 1859) by Paolo Carrer (1829-1896), to the poetry of Aristotelis Valaoritis, is the most emblematic melody of all Greek Music. Its popularity, perhaps unique in the world, was such that the composer was completely forgotten and the work came to be considered a folk song.

We owe the two most important chronologically, and certainly two of the earliest, references to the song to the composer himself, in the extant part of his invaluable Memoirs that end abruptly in the year 1887.[1] First reference:

On 20 April 1859, we set out on an artistic tour as far as Smyrna. And first at Patras where (…) we remained a few days for the Easter holidays. At the great Gerokomeio (Old People’s Home) festival, where thousands of people gather from all the surrounding villages, I received the first hint for the setting of my second klepht song into music, ‘I have grown old, O my lads’, to the poetry of Valaoritis, which I subsequently added to Markos Botsaris.[2]

He does not explain exactly what that hint was nor does he say when he incorporated the song in his 4-act opera Markos Botsaris. We do not know whether he did so before the work’s world premiere (Patras, 30 April 1861) or for a later production. Second reference:

In September and October 1859, I wrote the continuation of my ‘Greek Melodies’—‘Blossom and Dawn’ - ‘The Moon’- ‘Dimos’ - ‘The Lament of Sarandaras’, to a poem by Dionysios Carrer - ‘Love’ - ‘The Soldier’, and finally what became a very folk-like melody, ‘Maria’, to the poetry of Ioulios Typaldos (…) [3]

With regard to form, we would characterize Gero-Dimos as a strophic song, with elements of a ternary form (AABA). The mere insertion of B (bar 88 onwards), Run, lad, quick! Run up to the ridge, would be enough to contradict those that were under the impression that it was a folk song.

The transcription of the work for string quartet by Nikos Skalkottas cannot be easily dated. Skalkottas’ manuscript score is not saved, but the manuscript instrument parts were found and, in 1963, were deposited at the Skalkottas Archive by the Koutsimanis brothers, colleagues of Skalkottas in the ‘Athens Quartet’. Kostis Demertzis dates the transcription at about 1949, while Yannis G. Papaioannou places it two years earlier—around 1947—and assigns to it the catalogue number 37a. Skalkottas used the (undated) Z.Veloudios edition for voice and piano (with serial number 46, 1887/88?) or some reprint of it, and the fact that he took an interest in this work poses the important question of the degree of his familiarity with 19th century Greek music (predominantly Ionian, as we know) and whether he was aware of the consequences of its condemnation by Manolis Kalomiris and his followers.

1 other products in the same category: