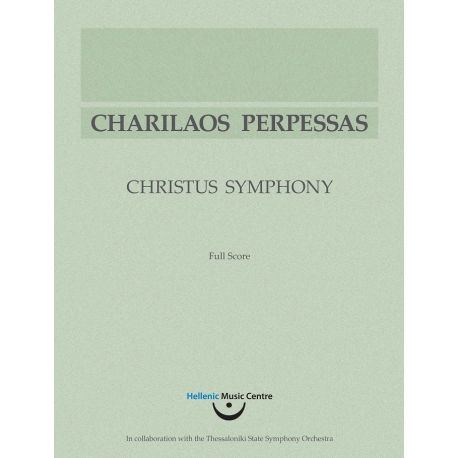 Charilaos Perpessas (1907-1995) was born of Greek parents on 10 May 1907 in Leipzig, where he spent his childhood and youth.
He started composing the Christus Symphony in Athens before 1948, a year that marks the close of the second period of his life and the beginning of the third, with his departure for America. The work was completed in New York in 1950. The first performance was given on 26 October 1950 by the Orchestra of the Philharmonic-Symphony Society of New York at Carnegie Hall under the baton of Dimitri Mitropoulos, and was followed by another on 27 October. By popular demand, the concert was repeated on 2 and 3 December, and there was also a broadcast on WCBS on 10 December. Six years later, on 21 and 22 December 1956, Eugene Ormandy presented the work with the Philadelphia Symphony Orchestra.
The Symphony is made up of six movements, the first five being played without intermediate pauses. The sixth movement, which is divided by a pause from the rest of the work, is an orchestral elaboration of the hymn OhDumeinJesus (O Thou my Jesus). Both the text of the hymn – or rather prayer – and the melody are authentic creations of the composer.  On the manuscript we read the prayer (in translation from the German original):

Ο Thou my Jesus, O Thou my Saviour,
Come and save us from our deep woe.
When we gaze upon Thee, we in the valley of tears,
Cleanse us from all grief and sorrow.

From of old, amid the rage of robbery and blood-lust, it came to wise men’s consciousness that the human race was suffering from a malady which necessarily kept it in progressive deterioration. Amid the vast tragedy of this worldly existence and the unendingly self-destructive will powers of history our sole hope is the Redeemer. The ultimate destiny of mankind depends on the acceptance of the teaching of Christ. The life of mankind will end with its self-destruction if mankind does not decide to overthrow the deceptive picture od the world of appearance and to establish the Kingdom of God on Earth. Are we not able to do it then it is very well possible that this our whole civilization with art, science, valour, point of honor and prestige for nations and politicians, life and chattels should one day fly into the air through some incalculable accident. O, Redeemer, stand by us in Thy immeasurable compassion.
Music reveals the fullest measure of Christian religion with incomparable definiteness. As pure Form of a divine Content freed from all abstractions we may regard it as a world-redeeming incarnation of the divine dogma of the nullity of the world of the phenomena itself. In language confined to concrete thought, using concepts and metaphors for that which words can never convey, we can only say: ‘This signifies.’ Music says: ‘This is.’ For she puts a stop to all disagreement between Reason and Feeling, and that by a tone shape completely removed from the world of appearances, not to be compared with anything physical, but conquering our heart as by the act of Grace.

Though, according to the 1950 programme, the work consists of five movements performed without intervening pauses, the historic recording of the 3 December concert saved in the archives of the New York Philharmonic includes the 6th movement. There is clearly an inconsistency between text and performance.
A notable correction in pencil on one of the 1950 programmes points to the existence of the 6th movement and mentions that the composer used the following extract from the Revelation of St. John (iv. 1-5) for the 1st movement:

After this I looked, and, behold, a door was opened in heaven: and the first voice which I heard was as it were a trumpet talking with me; which said, Come up hither, and I will shew thee things which must be hereafter.

The entry of the wind instruments of the orchestra at the beginning of the work may be an echo of the phrase: and the first voice which I heard as it were a trumpet talking with me.

For the description of the 2nd movement, the composer uses excerpts from the Revelation of St John (xxi. 3-4):

And I heard a great voice out of Heaven saying, Behold, the Tabernacle of God is with men, and He will dwell with them and they shall be His people, and God himself shall be with them and be their God. And God shall wipe away all tears from their eyes; and there shall be no more death, neither sorrow, nor crying, neither shall there be any more pain: for the former things are passed away.

The 3rd movement is entitled: The malady of mankind: self-destruction.
In the 4th movement Love, Faith and Hope prevail.
For the 5th movement, extracts from the Revelation of St John are cited (xix. 1, 7):

In the 6th movement is heard the hymn O Thou my Jesus.

In 1951, in a letter to Wilhelm Furtwängler, Bruno Walter writes about the Christus Symphony:

The work has deeply moved me, yeah, I can say I was overwhelmed. The musical idiom in which Perpessa expresses himself is very interesting and of convincing power.

In the musical writing of Charilaos Perpessas we can distinguish both his personal stylistic elements in the harmony, the rhythm and the organization and the idioms of Romantic and Post-romantic composers, from Beethoven to Bruckner, Mahler, Wagner, Ravel and R. Strauss. Perpessas never belonged to a national school. He described himself as ‘traditional’ or ‘a man of the great tradition’.

6 other products in the same category: