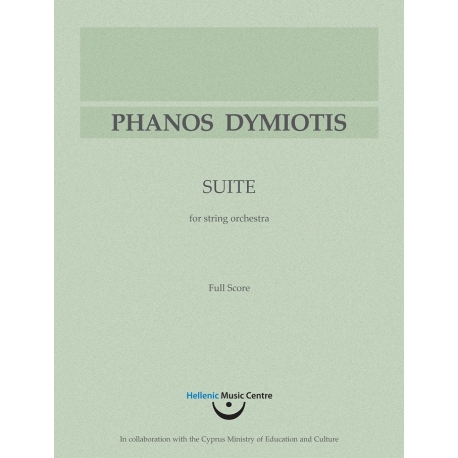 The Suite for String Orchestra was written for the Preparatory String Ensemble, one of the groups that make up the Greater Princeton Youth Orchestra (GPYO). Completed on January 10, 1993, it was performed in May 1993; it is dedicated to John Enz, a cellist of the Princeton Symphony Orchestra (another GPYO group), and a musician devoted to the organisation and teaching of young musicians' ensembles – in Princeton and beyond.

The dedication reflects Dymiotis's own commitment to the musical education of the young and to the teaching of music as a social duty. This is certainly related to the fact that Dymiotis was never involved in avant-garde music. Indeed, all his composition teachers were post-avant-garde composers, and Alexander Goehr, Dymiotis's valued teacher in Cambridge, had deliberately abandoned avant-gardism, realising that music will not serve as a field of artistic expression if one moves beyond the tradition of a culture's sound symbols.

In each movement of the suite, Dymiotis expresses himself in the style of one of the successive periods of the Western tradition, from the baroque to the 20th century. The work could therefore be termed a "historical suite", while, from another point of view, the four movements (all in some sort of ternary form) correspond to those of a classical symphony.

The "Siciliano", in the familiar 6/8 dotted rhythms by which a pastoral atmosphere was attributed to the Sicilian dance, is the only movement with a direct link to the baroque suite. In the mid-section, runs of sixteenth notes are introduced, which are then both contrapuntally and melodically combined with the dotted patterns.

The second movement, "Aspects of Dance", is, in its structure and harmonic clarity, "Like a minuet" of the classical period, or rather like a scherzo, given its (Eastern European) folk-like turns and its "awkward" final cadence. Interestingly, due to the flautando bowing required, the "Trio", although in 5/8, has not the character of a folk dance.

The title of the slow movement, "Arches", alludes to the overall ample curves of the melodies, but, mainly, to the bow and the bowed instruments, because this movement is the most appropriate to the bowed strings' sound production and quality. "Arches" is in a late romantic style, with perpetually changing chromatic harmony, fluid rhythm, and an emotional climax achieved by a crescendo and the synchronous densification of accompanying figures. Even this movement, however, maintains the contrapuntal lucidity that is one of the composer's characteristics, and which allows dignity to bridle sentimentality, and some of the bright Mediterranean light to emerge.

The last movement, a "Merry Postlude", is witty, lively and bright. It is permeated by dance-like patterns, reminiscent of 20th-century composers inspired by folk music like Nikos Skalkottas, whose Arcadian dance motive of descending thirds is distinctly heard in the "Meno Mosso" central part of the ternary structure. The return to the first subject is introduced by a monologue of the first violins, ending with a decisive upward scale, and the movement finishes with a similar playful monologue ending the work abruptly and humorously.

A composition entitled Diptych and dated 1998, recorded in a provisional Catalogue of Dymiotis's works compiled by Maro Skordi, consists of the first two movements of the suite. The present edition, therefore, contains two works: the Suite for String Orchestra of 1993, and the Diptych for string orchestra of 1998.

The first page of each movement