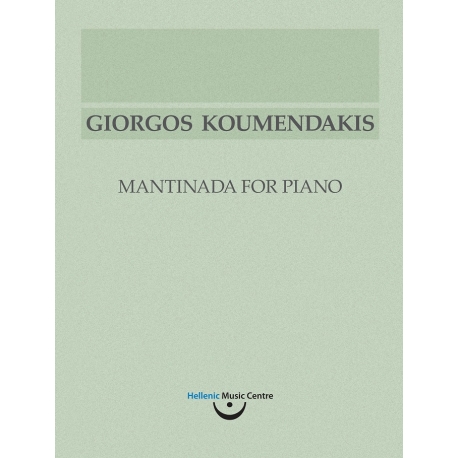 With his Mantinada for Piano (2016), Giorgos Koumendakis approaches Cretan traditional music through a classical instrument, the piano. This piece evokes the traditional kondyliés, familiar to the Cretan-descended composer: short musical phrases originally played on a reed pipe between two successive nodes (kóndyli), and subsequently applied to stringed traditional instruments (Cretan lyra, violin). Just as each bowing has many turns-embellishments, so the composer improvises with notes corresponding to the ‘fingerings’ of the kondýli, of small rhythmic values.
The composer is also a versifier. A piece of verse, a poem consisting of five interrelated fifteen-syllable iambic rhyming couplets is central to the composition. The pianist rhythmically narrates, and musically accompanies at the same time, five mantinades, i.e. five fifteen-syllable iambic rhyming couplets, a characteristic form in Cretan musical tradition. The Cretan dialect bridges the gap between classical and traditional, while the pianist-narrator, though ‘in the third person’, sympathizes with the hero.
Whereas the composer’s directions for the narration allow little choice in the manner of recitation, the music itself uses few descriptive elements in supporting the poetic text, being hardly programmatic, and hardly an accompaniment in character. It follows, however, a peculiar form, beyond the conventional development of a musical idea, since it illustrates the general musical outline of the sex act in all its stages, from the ecstasy of desire to the physical consummation.
Through labyrinthine melodic lines, the composer reveals that the Minotaur, our ego-destiny, is not a monster with the head of a bull but a bull with the head of a man. This solitary being dies unresistingly, in torment but also in a state of relief and redemption, like the man-hunter who is put to trial but does not lose faith in happiness, love, life. His steps along the dark, meandering path are guided by the initiation process of woman trying to soften the male brutality of physical desire towards the gratifying consummation. The Mantinada for Piano thus becomes an acoustic, meditative thread powerful enough to lead us back to our roots, like a lunar, menstruating Ariadne who possesses the ageless milk of harmony and self-knowledge.