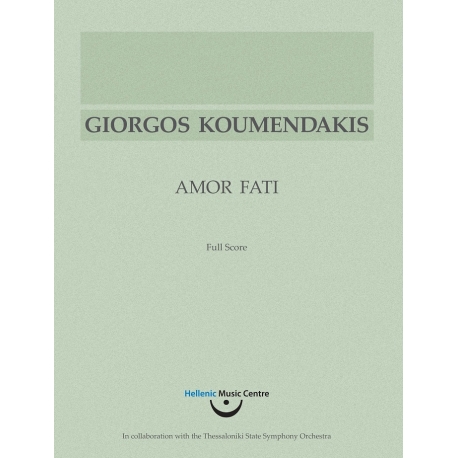 In Amor Fati (2007), Giorgos Koumendakis approaches Cretan music via an abstractive orchestral script, without using any traditional Greek instruments. The inaugural soloist lines on the violins refer to Cretan kondyliés witnessed in Swiss musicologist Samuel Baud-Bovy’s transcriptions; brief musical phrases, in other words, initially performed on a piece of reed between two consecutive nodes (kóndyloi), and which, later on, also applied to string instrument music (lýra, violin). As each bowing has many turns-embellishments, similarly the composer improvises, evolving around a pentachord, such as the notes that correspond to the “fingers” of the node.

The use of three vibraphones rhythmically accompanied by the strings represents the distinctiveness of the Cretan lute as a par excellence accompanying “percussive” instrument. The string melodies converse with the wind sounds as a Cretan thiabóli or mandoúra – a processed reed in the shape of a recorder – would give space to the performer who is simultaneously the singer to vocalize half, one, one & a half or two fifteen-line rhyming couplets (mandinádes). The patterns stemming out from the composer’s transcriptions of bird chirpings sound on the woodwinds that intermingle with the strings in a Cretan dialogue or improvised rhyming couplets composition (mandinadomahía). The synthesis integrates the dancing dimension, as required by the Greek, traditional triptych “melody-word-motion” in syncopated and “asynchronous” accents which combined with the rhythms of the “percussive” strings realize a slow dance.

The balance between the Dionysian sounds on the winds, on one hand, and the Apollonian strings, on the other, immediately alludes to the Nietzschian ideas that Nikos Kazantzakis adopted, and the composer crowns via the naming of this work: the “tragic” co-existence of spirit and flesh, reason and passion, love of fate and the dual substance of man. The work’s message is undoubtedly auroral: the passion of the cross is followed by the Word’s up-heaval, something annunciated by the resurrectional “bells”-vibraphones, whilst during the last meters of the work, the composition’s vibration remains peaceful and meditative.

In his article Religion and Psychiatry, Irvin Yalom reports:

I much prefer a Nietzschian life-celebratory, life engagement, amor fati (love your fate) perspective. [...] Those individuals who feel they have lived their lives richly, have fulfilled their potential and their destiny, experience less panic in face of death. Therapists have much to learn from Nikos Kazanzakis, the author of so many great life-celebratory works of art [...] I love the advice he offers [...]: “Leave nothing for death but a burned-out castle.” It’s not a bad guideline for our life [...]

These thoughts by Irvin Yalom became the inspiration of Amor Fati (Love of fate), an optimistic work, perhaps my first with a positive impulse for life.

The work consists of three, consecutive movements and a long coda, all in one and only tempo. I derived the musical core and the basic theme from Cretan musical phrases (kondyliés) whereas the pitch is based on the sounds of the Cretan lýra (3-stringed instrument), thiabóli (recorder), mandoúra (single reed woodwind) and askomandoúra (bagpipe). Out of the brass, I only used the French horns, for sound economy, in order to avoid excessive tensions and impressions.

I attempted to see Kazantzakis’s work through contemporary lenses, without the usual folkloric dimension –which I believe is mistaken and restrictive in terms of the true essence of his creation, his philosophical and ideological substance. Since 1994, when awarded the Nikos Kazantzakis prize in Heraklion, I have been considering the composition of a work inspired by the author’s writings and personality. It was the Thessaloniki State Symphony Orchestra and Myron Michailidis with their commission that acted as a catalyst toward the fulfillment of my desire, and that for I thank them warmly.

6 other products in the same category: