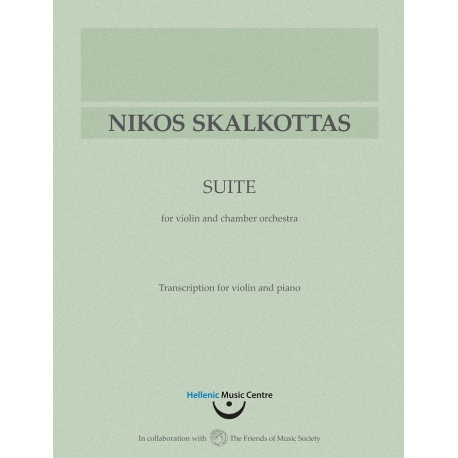 Preface by the Orchestrator and Editor

The Suite for Violin and Chamber Orchestra (1929) by Nikos Skalkottas (1904-1949) is one of the works that the composer left behind in Berlin around March 1933, thinking that his return to Athens would be temporary. A mature composition dating from his time in Arnold Schoenberg’s class, and written by a formidable violinist/composer, it was dedicated to distinguished Russian violin soloist and conductor Anatol [Anatoly] Knorre, who premiered it in April 1930 at a concert of the Berlin Singakademie under the slightly different title Kleine Suite für Violine und Orchester [Little Suite for Violin and Orchestra], which should not be confused with the Little Suites No. 1 and No. 2 for violin and piano (1946 and 1949, respectively), works of his late Athenian period. After that occasion, this work was probably not performed again, because, according to the historical sources, the entire body of manuscripts of his compositions was pawned by his Berlin landlady, presumably due to debts, and was subsequently lost.

A few works of that period have been recovered, thanks to the efforts of such important figures of Greek musical life as pianist and conductor George Hadjinikos, composer Yorgo Sicilianos, benefactor Manolis Benakis, and some distinguished musician friends of the composer, to whom Skalkottas had entrusted manuscripts of works that he had composed for them: violinist Nelly Askitopoulou-Evelpidi, violist Eugene Lehner, and pianist Antonis Skokos among them. Despite all efforts, up until the year 2010 no more than twelve original Skalkottas compositions of the Berlin period were available, out of a total of about seventy works, according to the estimate of Yannis G. Papaioannou!

In 2010, musicologist Yannis Tselikas discovered entries of authentic manuscripts of the reduction for violin and piano, and of a fair copy of the violin part, under the original title Suite für kleines Orchester und Violine, in the electronic catalogue of the Music Library of the University at Buffalo, The State University of New York. Another work belonging to the same period was located in the same library: the Concerto for Violin, Piano and Orchestra (March 1930), which was performed at the same concert in Berlin (April 1930). Both works were declared lost in the catalogue of Yannis G. Papaioannou.

The Friends of Music Society, through the Head of the ‘Lilian Voudouri’ Music Library of Greece Mrs Stefania Merakou, secured photocopies of the manuscript sources as well as the copyright of these works. The Hellenic Music Centre was entrusted with their revision, re-orchestration, and publication, so that these lost pieces of Greek culture may reach the concert hall and the recording studio.

Unfortunately, in the case of the Suite for Violin and Chamber Orchestra, only four out of the five movements of the work could be reconstructed, as only the violin part is saved out of the entire fifth movement (Finale), and any attempt at recreating the piano part would have been risky. For historical reasons, the incomplete fifth movement is included in the edition of the piano reduction, and also in the solo violin part supplement, but not in the re-orchestrated score. The orchestration of the first four movements, completed in 2015, was based upon the note, in the composer’s own hand, on the cover of the violin part, about the instrumentation, and also upon the few yet precious orchestrating instructions either in the piano part or in the violin part, remaining faithful to his compositional and orchestrating style.

This composition is a characteristic sample of Skalkottas’ work of that time, at the height of his second creative period in Berlin (September 1927 – summer 1931), and therefore constitutes a new piece of evidence for the analysis and comprehension of the development of his musical language. The aesthetics of this work, the pitch organization, and the choice of instrumentation, which is based on the winds and the low strings, evoke works not only by his teacher Arnold Schoenberg but also by his other favourite composers of the time: Igor Stravinsky (L’histoire du soldat, 1918); Kurt Weill (Skalkottas’ orchestration teacher, Concerto for Violin and Wind Orchestra, 1924); and Paul Hindemith (Konzertmusik, op. 48, for viola and chamber orchestra, 1929-30, in which the violins—and the violas—are likewise absent from the orchestral accompaniment).

The articulated structure of five brief, densely written movements, in the form of a suite (favoured in his early works), the exhaustive economy of his musical material through the use of free atonal counterpoint and motivic variations, as well as the equal treatment of the twelve notes of the chromatic scale (which generally constitute twelve-tone themes, though not always with strict serial elaboration), are already inextricable elements of his compositional technique at a structural level. At the same time, the irregular temporal permutation of short rhythmic motifs, which leads to an ambiguity in the musical metre, has become an additional characteristic of his music, while the imaginative and functionally independent orchestral accompaniment, without the use of violins, so that there may not be an overlap between the solo instrument and similar timbres, prefigures the future development of Skalkottas as a composer and orchestrator.

FIRST PERFORMANCE of the work:

FIRST PERFORMANCE of the new orchestration:

3 other products in the same category: